WHAT IS NOLA OIL TERMINAL?

NOLA Oil Terminal is a planned terminal along the Mississippi River in Myrtle Grove, Louisiana in Plaquemines Parish. It will be the first terminal in the region capable of accommodating New-Panamax vessels. The organization is the outgrowth of the partnership between Roy M. Carubba, PE of Carubba Engineering and Christian Amedee of NOLA Oil Terminal. Christian scouted and purchased the property 10 years ago, researched the site, and created draft designs for the buildout of the terminal.

WHEN DID CONSTRUCTION BEGIN ON NOLA OIL TERMINAL?

The construction is divided into two phases:

WHEN WILL CONSTRUCTION BE COMPLETE?

Phase one, which encompasses marine construction, is projected to be completed in mid-2022; the timeline for phase two is to be determined.

HOW IS THE CONSTRUCTION OF NOLA TERMINAL BEING FUNDED?

Construction of the terminal project is partially funded with $300 million in wharf and dock bonds issued through the Port of Plaquemines, LA.

The terminal will berth New-Panamax ships to load and unload crude oil and other clean petroleum products along the Mississippi River, which is currently not possible.

WHAT TYPE OF SHIPS WILL USE THE NOLA OIL TERMINAL?

NOLA Oil Terminal will be able to berth tankers up to 170,000 dwt (New-Panamax) size. New-Panamax is a size category denoting vessels too large to fit through the Panama Canal before its 2016 expansion. Per the Panama Canal Authority, these vessels have dimensions of right at 1,200 feet in length, 160-foot beam, 190-foot height, and 50-foot draft. These New Panamax vessels can accommodate 1,000,000 barrels of cargo as compared to current maximum cargo of 500,000 barrels.

HOW MANY DOCKS WILL THE TERMINAL HAVE ONCE COMPLETED?

Phase one provides for two deep water berths for New-Panamax tankers and one barge dock.

will be determined at that time. The fourth permitted dock is the upriver barge dock and can be

constructed in subsequent phases during the continued develop of the terminal.

HOW MANY VESSELS A WEEK DOES THE TERMINAL EXPECT TO SERVICE?

The terminal is expected to service up to two ocean-going vessels each week per ship dock, for an initial total of up to four per week.

The terminal barge docks can service up to 120 barges per week per dock.

WHAT ARE THE ADVANTAGES OF PLACING NOLA OIL TERMINAL ON THIS SITE?

The site will give the lower Mississippi River a much-needed terminal for New-Panamax sized tankers to load and unload crude oil and other clean petroleum products.

WHAT IS THE ANTICIPATED FINANCIAL IMPACT TO SOUTHERN LOUISIANA?

NOLA Oil Terminal in total is a $930 million dollar project that will create a significant impact on the local economy. The project will create tax revenue for Plaquemines Parish and the state of Louisiana, both during construction and during regular operation, and it will create additional optionality for oil and gas companies to import and export oil and petroleum and products.

HOW MANY JOBS WILL NOLA OIL TERMINAL CREATE?

WHAT IS THE POTENTIAL ENVIRONMENTAL IMPACT OF THE TERMINAL?

The Providence Engineering and Environmental Group LLC conducted a study in conformance with the requirements set forth by the Environmental Protection Agency. The report found no indication of a material threat of any hazardous substances or petroleum products being released into the ground, groundwater, or surface water.

WHAT CURRENT INFRASTRUCTURE IS IN PLACE?

WHAT IS THE PLAN FOR PHASE TWO?

Investment opportunities for phase two are currently underway. Approximately $280 million from the $300 million bond issue will be applied to phase two.

Once the final funding package is identified for phase two, then the scope of work and critical path construction schedule will be developed.

HOW CAN I LEARN MORE ABOUT NOLA OIL TERMINAL?

For more information about NOLA Oil Terminal, visit www.nolaoil.com. If you have additional questions, please feel free to reach out to christian.amedee@nolaoil.com.

NOLA Oil Terminal to be only Mississippi River wharf to handle 1,200-foot vessel

Read more
about this case 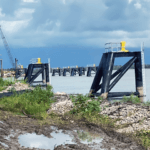 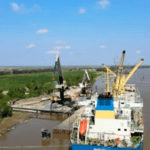 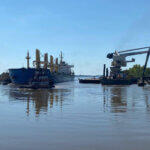 You can find us at